UK consumers cut spending on clothing, DIY and beauty products in August, while business activity contracted, in a sign of “collapsing” demand owing to the intensifying cost of living crisis.

With inflation at a 40-year-high, the figures highlight how the start of Liz Truss’s premiership will be framed by rising energy and food prices putting pressure on households’ finances and soaring costs adding to business challenges.

The Barclaycard data, which represents almost half of the UK’s credit and debit card transactions, showed that spending on clothing in August was down 1.9 per cent compared with the same month last year and down 10.7 per cent month on month.

Spending on electronics and home improvements, as well as in department stores and health and beauty stores, was also down compared to the previous month.

This comes as average spending on utility bills in August was up 45.2 percent compared to the same month last year, according to the data, leaving households with less to spend in other areas.

José Carvalho, head of consumer products at Barclaycard, said the soaring cost of living was “clearly leading Brits to cut back on some non-essential purchases to ensure they can afford the increasing costs of their weekly grocery shop and household utility bills”.

Separate figures on Tuesday from advisory firm KPMG with the British Retail Consortium, an industry body, showed the annual growth of non-inflation adjusted retail sales more than halved to 1 per cent in August, from 2.3 per cent in the previous month.

With consumers reducing discretionary spending, many businesses suffered. The S&P Global/Cips UK purchasing manager index for manufacturing and services dropped to 49.6 in August from 52.1 in July and below a flash reading of 50.9.

This was the first time the reading fell below 50 — the threshold between contraction and expansion — since January 2021, when the country was in a Covid-19 lockdown.

Chris Williamson, chief business economist at S&P Global Market Intelligence, said the figures showed that incoming prime minister Liz Truss “will be dealing with an economy that is facing a heightened risk of recession, a deteriorating labor market and persistent elevated price pressures linked to the soaring cost of energy”.

Williamson said demand for consumer-facing services, such as restaurants, hotels, travel and other recreational activities, was “collapsing under the weight of the cost of living crisis“.

The final reading for the services sector was 50.9 in August, down from initial estimates of 52.5 and the lowest since February 2021. The corresponding reading for manufacturing, published last week, was 47.3. That indicated the worst contraction since May 2020, when strict Covid curbs were in place.

Samuel Tombs, chief UK economist at the consultancy Pantheon Macroeconomics, said: “The latest PMI data signal that the economy is on the brink of a recession.” 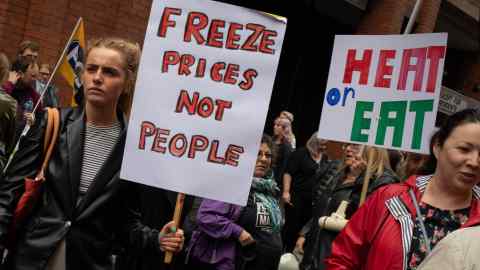 The PMI survey also showed that among service providers, operating costs rose sharply and there was evidence of higher wages and salaries being paid, adding to expectations of more permanent high inflation.

“Services businesses will have their eyes firmly on the new prime minister this week as they hope for a policy-driven solution to rocketing costs,” he added.