Moscow blamed “sabotage” for explosions at an ammunition depot in Crimea and claimed Ukraine was behind covert attacks in mainland Russia, providing possible evidence of Kyiv’s increased ability to strike deep behind enemy lines.

Russia’s admission that forces loyal to Ukraine struck more than 100km behind the front lines was a rare acknowledgment of Kyiv’s recent success in targeting its military infrastructure, including on the Black Sea peninsula annexed by Moscow in 2014.

Videos posted on social media showed huge plumes of smoke rising from the base after a series of explosions on Tuesday. The ministry claimed there were “no serious casualties” at the base in the village of Maiske in northern Crimea, which it said also damaged power and railway lines, an electricity substation and several residential buildings.

Sergei Aksyonov, the top Russian official in Crimea, said two people were hospitalized after sustaining minor injuries from the blast. He declared a state of emergency and said authorities had evacuated about 3,000 people from the area. Ukraine did not confirm it carried out the attack.

Plumes of black smoke were also seen at an air base near the provincial capital Simferopol, Russian newspaper Kommersant reported, citing eyewitnesses. It referred to a local security official who suggested Ukraine had used a drone to attack the base.

The FSB, Russia’s main security agency, also said “Ukrainian saboteurs” had blown up six towers carrying high-voltage power lines in Kursk, near Russia’s western border with Ukraine. It said the attacks “led to a disruption in the technological process” at a nearby nuclear power plant.

Ukraine has apparently begun to target Crimea in an effort to reclaim territory in the country’s south held by Moscow since President Vladimir Putin launched the invasion six months ago.

Officials in Kyiv claimed nine fighter jets were destroyed after a series of explosions last week at Saki air base, which is 200km behind the front line. Russia has used the heavily fortified peninsula as a base for launching attacks on Ukraine from the south, where Kyiv is trying to retake Moscow-held territory. 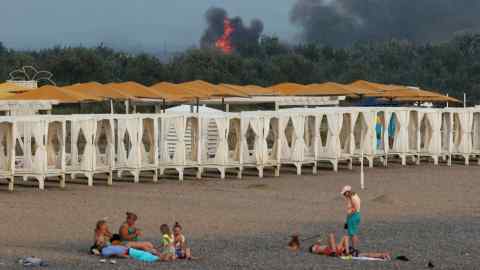 Crimea had been seen as a beachfront idyll untroubled by the war mainly unfolding in Ukraine’s east and south before the recent spate of attacks on the Black Sea region.

Traffic on a bridge linking the peninsula with mainland Russia hit a new daily record, with more than 38,000 cars leaving on Monday, according to the news agency Interfax.

Russia has previously played down reports of apparent attacks by Ukraine, which have included strikes on railway supply lines and a “kamikaze” drone strike on a refinery in the southern region of Rostov in June.

State media has reported on “bangs” instead of “explosions”, while officials have passed off incidents such as the attack on the Saki air base as accidents.

Kyiv has not claimed responsibility for the attacks either, but Ukrainian officials have given cryptic comments about the explosions.

Mykhailo Podolyak, a senior adviser to Ukrainian president Volodymyr Zelenskyy, tweeted about Tuesday’s explosions: “Crimea occupied by Russians is about warehouse explosions and high risk of death for invaders and thieves.” He added a joke mocking one of Putin’s stated aims for the invasion: “Demilitarisation in action.”