Russian missiles hit industrial facilities at a strategic city in southern Ukraine on Sunday as a funeral was held for a four-year-old girl killed in an earlier deadly strike elsewhere in the country.

Liza Dmitrieva, who had Down syndrome, was en route to see a speech therapist with her mother when a Russian missile struck the city of Vinnytsia in central Ukraine on Thursday.

At least 24 people were killed, including Liza and two boys aged seven and eight. More than 200 others were wounded, including Liza’s mother, who remains in an intensive care unit in serious condition.

“I didn’t know Liza, but no person can go through this with calm,” priest Vitalii Holoskevych said, bursting into tears as Liza’s body lay in a coffin with flowers and teddy bears in the 18th-century Transfiguration Cathedral in Vinnytsia.

“We know that evil cannot win,” he said, his voice trembling, as dozens of relatives and local residents attended the funeral.

On Sunday, more Russian missiles struck industrial facilities in the strategic southern city of Mykolaiv, a key shipbuilding center in the estuary of the Southern Bug river. There was no immediate information about casualties.

Mykolaiv has faced regular Russian missile strikes in recent weeks as the Russians have sought to soften Ukrainian defenses.

The Russian military has declared a goal to cut off Ukraine’s entire Black Sea coast all the way to the Romanian border. If successful, such an effort would deal a crushing blow to the Ukrainian economy and trade, and allow Moscow to secure a land bridge to Moldova’s separatist region of Transnistria, which hosts a Russian military base.

Early in the campaign, the Ukrainian forces fended off Russian attempts to capture Mykolaiv, which sits near the Black Sea Coast between Russian-occupied Crimea and the main Ukrainian port of Odesa.

Since then, the Russian troops have halted their attempts to advance in the city, but have continued to pummel both Mykolaiv and Odesa with regular missile strikes. 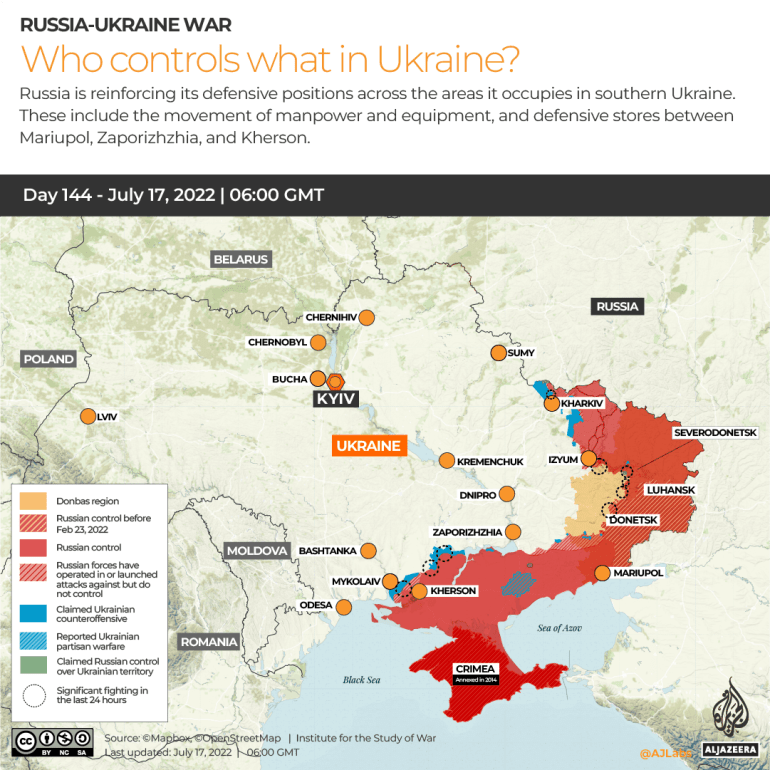 The Russians have also sought to reinforce their positions in the Kherson region near Crimea and part of the northern Zaporizhia region that they seized in the opening stage of the conflict, fearing a Ukrainian counteroffensive.

During a visit to the front lines on Saturday, Russian Defense Minister Sergei Shoigu issued an order “to further intensify the actions of units in all operational areas”.

The British defense ministry said on Sunday that Russia was also reinforcing defenses across areas it occupies in southern Ukraine after pressure from Ukrainian forces and pledges from Ukrainian leaders to drive Russia out.

The ministry said that Russia is moving manpower and equipment between Kherson, Mariupol and Zaporizhia. It said the Russians are also increasing their security measures around Melitopol.

It added: “Given the pressures on Russian manpower, the reinforcement of the south while the fight for the Donbass continues indicates the seriousness with which Russian commanders view the threat.”

Ukraine says its forces still retain control of two small villages in the Luhansk region, one of the two provinces that make up the Donbas, and are successfully fending off Russian attempts to advance deeper into the second one, the Donetsk region.

The Russian military said it has hit Ukrainian troops and artillery positions in Donbas in the latest series of strikes, including a United States-supplied high mobility artillery rocket system (HIMARS) deployed near the eastern city of Pokrovsk. The Russian claims could not be independently verified.

The head of Pokrovsk regional police, Ruslan Osypenko, said a residential area had been shelled by Russia with multiple rocket launchers and there were dead and wounded. Authorities released video of damaged homes and residents describing the attack.

Vadym Skibitskyi, an official at Ukrainian military intelligence, said on Saturday that HIMARS could be used on targets in Crimea, which was annexed from Ukraine by Russia in 2014 when it also backed armed separatists in eastern Ukraine.

Former Russian President Dmitry Medvedev said on Sunday that the refusal of Ukraine and Western powers to recognize Moscow’s control of Crimea poses a “systemic threat” for Russia.

In the event of an attack on Crimea, Medvedev was quoted by TASS news agency as saying, “Judgment Day will come very fast and hard. It will be very difficult to hide”.

Satellite images show the first ship out of Ukraine in Syria