It was recently announced that Kamal Haasan’s latest superhit movie Vikram became the highest-grossing Tamil movie of all time in the UK. To celebrate the enormous success Telugu superstar Chiranjeevi honored Haasan who is a close friend. Bollywood actor Salman Khan was also present at the event.

Lokesh Kanakaraj’s action thriller Vikram has performed exceptionally well at the box office. As part of the celebratory call for success, Telugu superstar honored his dear friend Kamal Haasan who made his comeback with the movie. He also posted pictures with Salman Khan and Kamal Haasan on his Twitter account. In the pictures, he can be seen posing with flowers as he felicitates Kamal Haasan.

Sharing the picture, he wrote that it was an absolute joy celebrating and honoring his dearest old friend Kamal Haasan for the spectacular success of Vikram. He also mentioned that the celebration was graced with the presence of Salman Khan and director Lokesh Kanakaraj and the team at his house last night. He added that Vikram was an intense and thrilling film. He wrote, “Kudos My friend !! More Power to you! ” 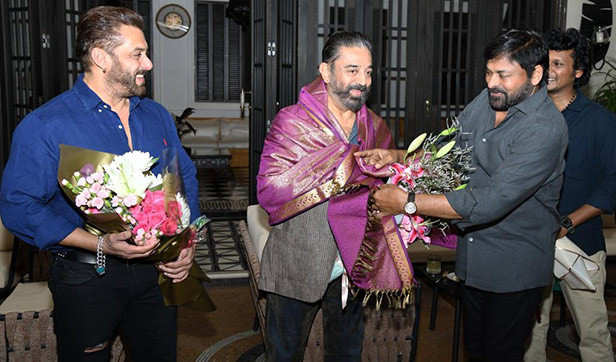 Apart from Kamal Haasan, the movie also features Vijay Sethupathi and Fahadh Faasil in lead roles. The movie is now in its second week of release and is performing strongly at the box office.

Absolute joy, celebrating & honoring my dearest old friend @ikamalhaasan for the spectacular success of #Vikram along with my dearest Sallu Bhai @BeingSalmanKhan @Dir_Lokesh & team at my home last night.What an intense & thrilling film it is !! Kudos My friend !! More Power to you! pic.twitter.com/0ovPFK20r4

15 Products to Keep Your Pets Safe & Cool This Summer